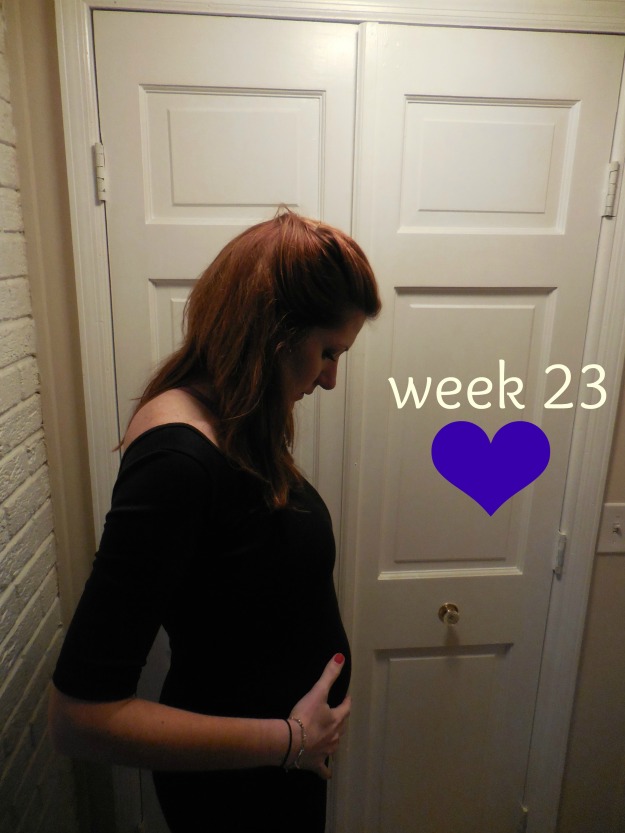 Weight gain:  I’m thinking 15 pounds ??  I’m really starting to think I might stop answering this question, because, well, I don’t want to anymore.  I’ve got a doctor appointment tomorrow, so I’ll know the exact amount then.

I’m feeling:  Still good.  Still overwhelmed — there’s a little bit of back pain and some swelling in my ankles and feet.   My rings have also gotten a little tight during the day, so I’ve just succumbed to wearing them on a chain around my neck.

Movement:  He is moving!!  He’s most active in the mornings and right before bed — although I have started feeling him more during the day.  Especially when I’m eating vanilla cupcake Goldfish.

Miss anything?:  Umm, being able to walk up and down a flight of stairs and not be completely out of breath would be awesome.

Food cravings:  Tomatoes with ranch — actually probably anything with ranch.  Like French fries would be good too.  And I also really want some Capn Crunch.

Sleep:  It’s happening.  Only getting up once a night or so — but when I do get up, I’m awake for a while.

We had our childbirthing class this weekend —  I’m pretty traumatized.  They should limit the amount of births they show us – I think one would have been good.  And well, it made an epidural look pretty good.  It was actually pretty informative, and I’m glad we went, and I did decide to try to stick out as long as I could before asking for the epidural.  The thought of not being able to move my legs kind of freaks me out.  But also the pain of having a child kind of freaks me out.

It was also good to know that B was the king of swaddling — the teacher called his perfect.  I hope little baby J is also an overachiever, and that he doesn’t know we called him a little baby burrito during class.